Part of wargaming MOTU requires a set of rules. I will explore the options for both tabletop and boardgames, both created specifically for MOTU or adapted from a generic game. There actually seem to have been at least 4 MOTU boardgames that I know of, not counting the infamous RPG that is reputedly unplayable (I'll still try to get it for completeness' sake), but, mostly being aimed at kids, not all of those are of the kind that lend themselves to a proper miniatures game.

To kick this off , I will start with an original MOTU-themed boardgame from 1984 that landed on my doorstep this week, courtesy of ebay and my wallet. To the best of my knowledge, "Le défi de Musclor" (He-Man's challenge), produced by Nathan, was only ever available to the French speaking market. At least, I couldn't see any English language equivalents.

At first glance, the premise and game components immediately look very promising, giving it the appearance of a simplified version of a MOTU-themed dungeon crawler. Productionwise it looks good. The game features some not quite but close Filmation style art throughout and the Castle Grayskull screen looks very cool.

The game plays on a tiled gameboard, consisting of two parts, divided by a cardboard screen of Castle Grayskull, meaning you play part of the game outside the walls and part of it inside. The inside section is raised, so it's about level with the gate opening.


The game uses 2D6, weapon- and combatcounters outside the castle, eventcards with traps and random encounters inside the castle and cardboard cutouts in plastic stands of the main characters, so on paper, that makes it perfect to use with miniatures. 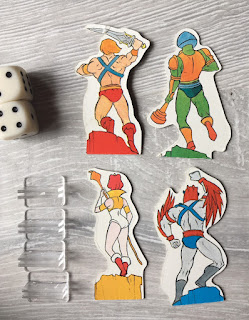 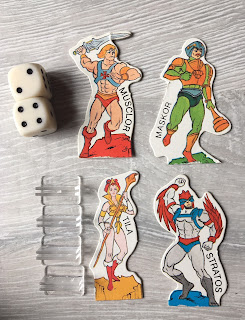 Interestingly, it is the Heroic Warriors who start outside the walls and the objective of the game is to get inside and defeat Skeletor. The 4 player characters are He-Man, Teela, Man-At-Arms and Stratos. Skeletor is represented by a card instead of a cutout figure. Beastman and Merman are present in the weapon counters.

During the first part of the game, each tile is covered with one of the square tokens, face down, and players move across the board outside of the castle (using the dice) and can collect weapons that will increase their chances to make it to Skeletor once inside the Castle. They will also need either a Battlecat or a Wind Raider to cross into the Castle more easily (instead of trusting on a lucky roll of the dice). If they encounter Merman or Beastman, they will lose one of their weapons.

Inside the Castle, the player has to make his way to Skeletor's throne room and the shortest route will be the most treacherous. Different weapons will help against different monsters/traps.

The final battle against Skeletor is decided with the dice, where any remaining weapons the player has will count as a +1 modifier to his advantage. You have to win three times in order to win the battle. If Skeletor wins three times, you are defeated and thrown out of the castle. The game then goes on until one of the players makes it to Skeletor and defeats him.

One thing that is a bit lacking for the discerning wargamer is the combat phase which is overly simplified. I might tack on something a bit more interesting to resolve combat with Skeletor. Likewise, I think I would make it so that when Beastman and Merman are introduced, they are added to the board and could engage players in combat instead of just stealing their weapons.

All-in-all I'm still pretty pleased with this purchase as the board looks fantastic for something that's 34 years old and after some tweaks to the rules, I look forward to giving it a spin, using my proper miniatures of course.