Hailing from the Antiverse, a mirror dimension in which good and evil have traded places, Anti-He-Man is the most ruthless tyrant that Anti-Eternia has ever known, and the arch-nemesis for the heroic Prince Keldor. The character was originally exclusive to a German audiobook story, though a popular character among collectors for custom action figures, given that he's a straight repaint. Eventually, his story came full circle when an official MOTU Classics figure was released by Mattel a few years ago, cementing his position in MOTU canon. 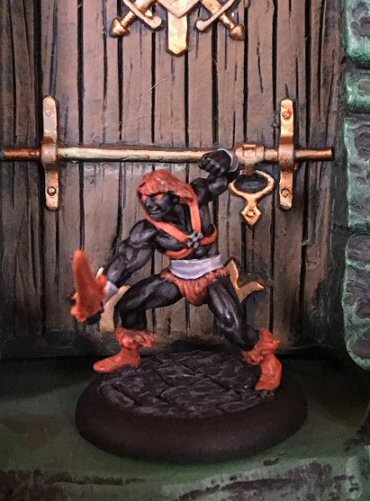 When Skeletor utilized the Elixir of Schneidor to open doorways into other dimensions, he inadvertently created a pathway to the Antiverse, allowing Anti-He-Man to cross over into Eternia. His evil powers unstoppable, He-Man and Skeletor had to unite to fight him. Since such an uneasy alliance can only end in betrayal, Skeletor sent both He-Men to the Antiverse. The story didn't end there of course and He-Man helped Prince Keldor overthrow Anti-He-Man in Castle Hellskull. He-Man was finally returned home by Gwildor and Zodak using the Cosmic Key.

Filmation fans should check out this gorgeous fanmade tribute by Grimbot that looks just like the real thing:


The model is of course the standard He-Man sculpt by Boris Woloszyn for Quest Miniatures, converted to remove the empty sword scabbard and with a custom base. The black skin didn't turn out the way I wanted, but it looks fine in person, so I'll leave it. I looked at a lot of images of Anti-He-Man art and customs for the best colour combination and pretty much ended up with the one from the fanmade video, which is appropriate since I'm trying to stick to a Filmation theme with these figures. Some versions online only use black and red, but I feel the grey bracers add a much needed flash of contrasting colour to keep the figure interesting. Unlike the video version, I did keep the glowing red eyes seen on most incarnations. Some people paint the sword black, which, while cool, can't beat the awesome vintage toy feel of a bright red version of the powersword.

Duel of the He-Man: 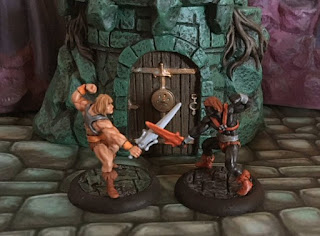 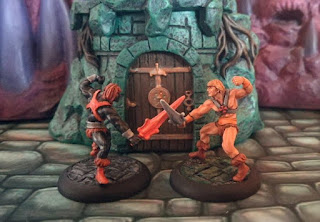 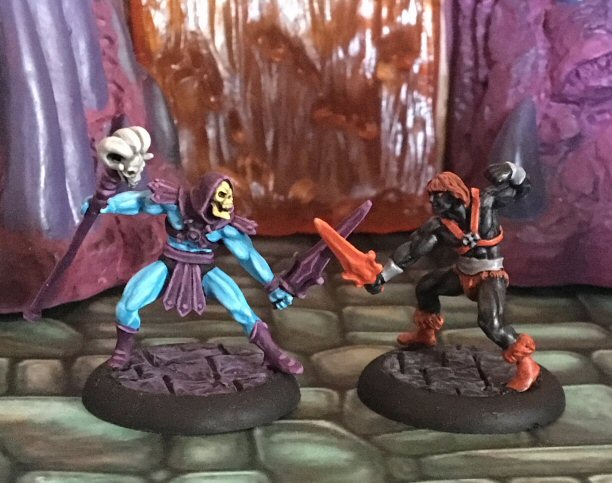