Having painted a second, improved version of Teela, the earlier version became obsolete. I could of strip her, but most of the paintjob was perfectly serviceable and since I learned about there being a Snakemen version of Teela in the MOTU 200x continuity, I wanted to do a Snake Teela as she could have appeared if done in Filmation style. So I went about repainting her skin in a green tone, and her eyes yellow. That the earlier, flawed skintone had left some rough patches here and there didn't really matter, as it all worked with the Snakemen theme. I painted her sword green, after the 200X Snake Teela toy figure accessory, though I left the shield as it was. Her base was repainted in my Snakemen base colours. A relatively quick job that meant I could keep using the figure without having to repaint a complete figure. Result!


The concept is inspired by the MOTU 200x episode "Second Skin", where King Hiss used an artifact that could turn regular people into Snakemen. In the story, Man-At-Arms, Mekanek and Teela were temporarily turned into Snakemen and battled He-Man. They were returned back to their human selves after He-Man destroyed the Serpents Ring and the Ophidian Spire. There was a toy version made of Snake Teela after the cartoon that looked like this: 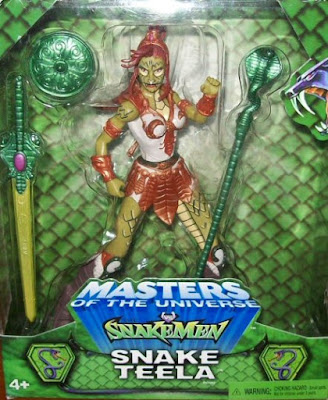 The 200x Teela design isn't quite the same as the Filmation Teela we know and love, so I tried to reimagine what Snake Teela would have looked like in a Filmation episode. With their love for reusing recoloured footage, just like the toys loved to reuse recoloured characters, a simple green repaint seemed a likely interpretation.