Of course, the first miniature to get some paint had to be He-Man, or should I say He-Men, as I painted two at once. The base model is sculpted in 30mm by Boris Woloszyn for Quest Miniatures. It comes with sword and shield, an empty sword scabbard for the back and a loose axe, like the toy, but is based on He-Man's appearance in the Filmation cartoon.

I converted both of my models. They were glued to their plastic bases and then I sculpted some tile texture over it with putty. The first was a minor conversion to be armed just with the powersword, like in the Filmation cartoon, without the shield or the empty scabbard. In the cartoon, the scabbard tended to appear when it was needed and disappear when it wasn't. 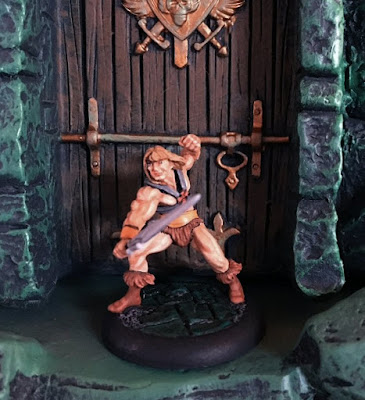 The second conversion was slightly more extensive. The powersword was cut off, and the hand was drilled, so the axe could be pinned into it. A new pommel was added under the hand with putty. In order to keep the powersword, I cut a plastic sword grip and crossbar from a sheathed sword from a Fireforge medieval men-at-arms set and glued it to the top of the empty scabbard, so my He-Man was complete. 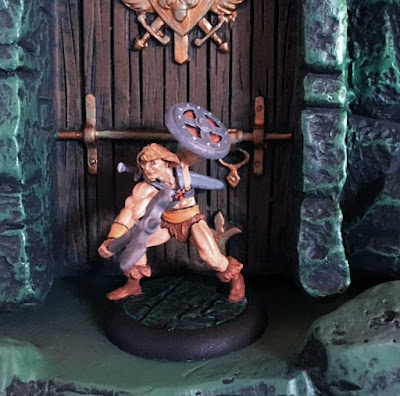 Starting these was a bit daunting as it's been over a year since I painted anything in this scale and even then I wasn't too happy with it. But they came out well enough, I can look at them and have that feeling of familiarity and recognising the toys of my youth, so that's something. I think those two will be the only regular He-Man variants I will do (unless Quest Miniatures brings out another pose), but there is a wealth of "evil" clones to bring to life in miniature, such as Anti-Eternia He-Man, Negative He-Man, Slimemonster He-Man,...
at February 21, 2018